What does an antivirus program do? 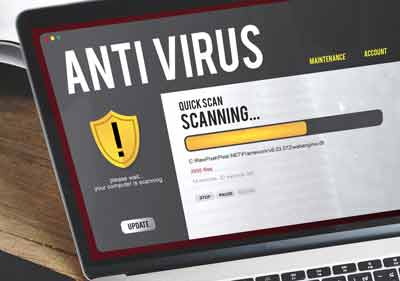 At their core, antivirus programs sit silently on your PC constantly watching for any viruses and deleting any they find. You should rarely even notice it running - normally they'll only pop up an alert if it finds anything suspicious.

As well as watching for viruses many antivirus programs do other tasks too, such as preventing personal data from leaving your computer, securely remembering all your passwords for you, or alerting you if you visit a dangerous website.

Does my phone need antivirus?

All computers will benefit from antivirus - not just those running Windows, but Apple Macs & Linux machines too. Some antivirus tools also exist for mobile phones (especially those running Android) although the need for these and their effectiveness is still debated.

There's lots of antivirus products on the market these days. We discuss how to choose between them further down this page, but some of the popular ones include:

You can buy antivirus either to download online or at your local computer store.

Only ever buy well-known antivirus software, and only from reputable stores. Never click any pop up web messages about antivirus - these may well be a virus themselves.

If you ever want to know if a product is a legitimate antivirus tool or not then see if it's listed on www.av-test.org or www.av-comparatives.org. These websites also allow you to research the best antivirus program in terms of detection rates and performance impact on your computer.

Why do I have to keep renewing it every year?

Antivirus software works by searching your computer for "virus signatures" (ie, the unique fingerprints of viruses) . When you buy antivirus software it's effectively these updates that you're subscribing to.

If you didn't renew your subscription (or buy a new product) each year then, since new viruses are being released constantly, you'll stop getting these updates & your software will effectively stop working.

How do I choose the best antivirus to buy?

There are lots of different antivirus tools on the market, many of which use baffling technical terms and marketing techniques to bamboozle users with flashy messages. Unless you work with computers regularly then working out which is the best antivirus program for you can be extremely confusing!

The main difference between paid-for and free antivirus is often all the extra features you get - the core aspects of detection and removal is almost always the same. Free software may also repeatedly nag you with adverts.

If all you’re looking for is simple antivirus protection and don’t mind the occasional pop-up advert, then a free tool might be right for you.

Are all antivirus tools as good as each other?

Whilst any legitimate antivirus software is far better than not having any at all, not all tools are as good as each other - whether that's at detecting viruses, removing them once they’ve been found, or at having minimal impact on your computer’s performance.

For most users the differences aren't a big consideration so you'll be fine with any antivirus software. But if you are interested then check out www.av-comparatives.org and www.av-test.org for up to date independent testing of how effective all the main antivirus tools are.

What features should I look for?

Antivirus tools have evolved over the years beyond simply detecting viruses. There’s now a dizzying array of useful features that many antivirus tools offer - some of which may be useful to you, others less so.

Some of the common features you might find (sometimes known by different but similar names) include:

This is a feature that tries to identify & block any dangerous internet traffic that’s arriving at or leaving your computer.

A firewall should be an essential part of any computer these days. Many (such as those running Microsoft Windows) will already have a basic one built in, however those bundled with antivirus tools can often be better at detecting threats.

Unwanted email messages ("spam") can be hugely annoying. The vast majority of it is simply unwanted marketing messages from legitimate companies, some of it is from questionable companies (such as trying to sell you drugs or a fake university degree), whilst a small and malicious proportion is trying to spread viruses or are phishing scams.

Whilst you can manually sort through these and delete them yourself, a spam filter will try to automatically identify spam on your behalf - allowing you to concentrate on your real emails instead.

The vast majority of the web is perfectly safe to visit, but a significant number of websites are malicious and will try to spread viruses. Some legitimate websites can occasionally be infected with viruses temporarily too.

Spotting all of these dangerous websites can be difficult. Antivirus tools therefore often offer a feature that hooks into your favourite web browser and will warn you if you’re about to visit a malicious website. You can then safely avoid it and go elsewhere instead.

Many of us have sensitive documents that we don’t want anyone else to see, for example if several people use your computer or if it were to be stolen. The password you use to login to your computer with can easily be bypassed by anyone with access to your computer & the right know-how, however a file encryption vault will stop this and lockdown any files you want to protect.

As we explain elsewhere on this website it’s crucial to keep your software up to date. A vulnerability scanner can automatically check your computer & let you know if any of your software needs updating, as well as identifying any poorly configured settings elsewhere (such as if your firewall is allowing dangerous internet traffic in). Some tools can even automatically fix any issues found.

Remembering passwords can be hard (although see at our guide here for some good tips). Some antivirus products help solve this problem by offering an in-built password safe, which will securely store all your passwords for you and even automatically log you into your websites.

If you have children using your computer you might want to prevent them from accessing certain websites, or to assign quotas for the length of time they’re able to use the internet for. With these tools you can also often define specific times of the day they can use the web as well as view reports on their activity.

A further benefit of some antivirus tools are features than help tune your PC & fix minor errors in its performance. This isn’t necessarily about any security issues but simply about keeping your computer running efficiently and at the best possible performance.

Confusing isn’t it?! Antivirus companies are constantly inventing new features to keep us buying their products, and many of these features can genuinely be useful in certain circumstances for some users.

Only you know what you need but, if you just want to keep it simple, then a basic antivirus program without any of these features will be absolutely fine.

If you're opting for a paid-for antivirus tool then as well as shopping around (as you normally would anyway) there's a few extra little tricks you can use to help save some money too:

If you have several PCs in your house (and remember that each one should be protected) then you might want to look for software that will allow you to install it on all of your devices. This way you won’t have to buy a separate copy for each computer. Look for terms such as "3 licenses" or "can be installed on up to 3 devices".

When buying antivirus software it can be beneficial to look for multi-year deals - buying one that is valid for 2 years often costs not much more than the equivalent for just one year.

Finally, just like car insurance, it pays to shop around. Towards the end of your license your antivirus program may prompt you to renew for another year. Whilst renewing within the software might be convenient, it’s often the most expensive option - some antivirus vendors will often charge 3 times as much to renew as you can buy the same product for new. Shop around!

We've mentioned it on this page already but this is worth repeating... It’s critically important when installing antivirus that you use a known product from a legitimate source. 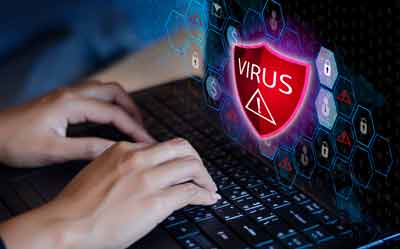 A popular trick amongst criminals is to scare people into buying worthless "antivirus" software. This is often by displaying a warning message claiming your computer has a virus, either in an advert on a website or even in a pop up message on screen.

If you did buy their "software", then as well as losing money on your credit card, you might also be infecting your computer with the very thing you were trying to protect against - viruses. The software you download is often riddled with viruses that try to make the scammers even more money, for example by redirecting you to their websites that are full of adverts.

Avoiding these scams is fairly easy:

Never buy any antivirus software that pops up on your screen unexpectedly.

Always make sure you buy your antivirus from a reputable high street or internet shop, or directly from a known antivirus manufacturer themselves (see our links above).